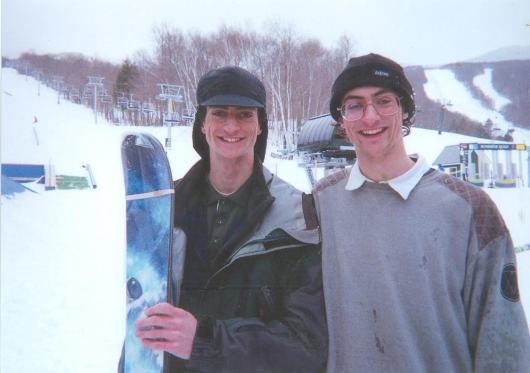 Flat Stan: Was trying to do some editing but nothings clicking, what you guys been up to?

Alex: Mostly school, I’ve been riding Bush and skating a little too now that its warming up here.

Zach: Been trying to enjoy the last weeks of the big park at Bush being open too but yeah mostly school.

Flat Stanley: Word word the park at Bush looks consistently mint, you guys been in the streets much this winter too?

Zach: Yeah the park crew homies at Bush kill it. We’ve been getting kinda dicked over as far as snow goes this year until recently but they’ve been holding it down really hard. The park is like always proper. It’s crazy.

Alex: Yeah Bush has been proper every day, those dudes hold it down. Zach has had a broken wrist for a minute and the snow didn’t really come around till late season. But we filmed a bit over spring break and stacked a bit. But less than last year.

Zach: Yeah definitely been a bit of a frustrating winter cause it’s been like a several month healing process, and its hard enough to find time to get out and film to begin with. But we did some skiing in Pittsfield Massachusetts which is a city right next to our parent’s spot over spring break and also took day trip to Albany with Brewer and Tall T Dan.

Alex: Pete has been popping off recently.

Flat Stan: That’s brutal, how did you break it? Really sick you guys been out’n about in the streets, Low Gain is one of my top 3 most viewed videos.

Zach: Thank you man I really appreciate that. I broke it skating I think, but I’m not sure. It had been hurting pretty much most of the summer and the fall, but didn’t think it was broken, and I finally got it checked out after finals last semester cause it hurt so much to write.

Flat Stanley: Jeez thats rough, that’s garbage when you can’t ski from something happening that wasn’t skiing. Massachusetts got some good spots though?

Alex: There’s not a huge surplus of spots in the Berkshires, but there’s classic local spots that are pretty easy to get around to. For sure the Boston area but we didn’t really get more than a day in there.

Zach: Yeah its pretty rural where we live so it can be a lot of driving. Albany isn’t too far though, but for the most part we’re in Burlington for the winter except when were on break.

Flat Stanley: Word that sounds pretty similar to the towns around where I live, you guys got any favorite tracks or videos you watch most before going on missions in the street?

Alex: I’m always too scrambled to watch anything like right before, but I get hyped in general by Video Entertainment, HG videos, OG’s especially Shea’s parts and the Utah homies.

Zach: Yeah, on top of what Alex said, any of the bunch trilogy, and I always like to watch shit from the people that worked at MHSSC too. Fuck with the Segcos videos super hard, and that edit of Nolan Willard at Hood.

Flat Stan: Shea flynn is the biggest OG and the Segcos guys look swag as hell. Jeez this is a very thoughtful hood vid (ZS: talking about Nolan Willard video). Speaking of OG’s, which OG’s would you guys most want to see new parts from or to bring back into skiing and filming segments?

Flat Stan: Shea and Charlie my top 2 as well.

Alex: I feel like a lot of the OG’s I grew up watching are still filming a lil. But Zach got most of em.

Flat Stan: Yeah true Shea and Chuck consistently been so damn G even though their style/kits change over the years they always been most swag. Would love to see a duo street project of those guys.

Zach: That would be so dope. Kinda happy he wasn’t a part of that Stept movie For Lack of Better though.

Flat Stan: Was gonna ask your guys thoughts on that

Zach: That video was a bummer.

Flat stan: Such divas about the streets.

Zach: It’s fine to be like over street skiing, and I can see why those homies are sick of it but idk.

Oscar: Like understandable to be sketched out by the stuff they’re hitting but the whole talk show about how garbage their careers are is very over the top.

Alex: I mean it’s all really gnarly and shit, but that movie made me feel bummed after.

Oscar: Haha yeah there’s no way to convince anyone that street skiing is cool or fun if you show them that movie only.

Alex: But I think that movie was TGR, the stept era really defined what urban skiing was in many ways.

Zack: Not that those homies didn’t make the videos that got me the mad hyped when I was younger, but it was for sure a weird way to go about making a video.

Oscar: Yeah, every Stept movie including Ten and Two are insane videos.

Zack: Ten and Two was dope. Shea’s part in that had so much attention to detail.

Zack: Yeah and so much unattural shit too.

Flat Stan: Word I still don’t know which is Flynn’s regular way of hitting a rail.

Zach: The only person who I can think of really on that shit in the same way is like Frank. It seems like he doesn’t even have an unnatural even on the most fucked stuff. I’ll never understand that.

Zach: Hitting shit in the streets unnatty is so hard.

Zach: Yeah plus both ways twos onto the red ledges.

Flat stan: Haha, yeah so crazy, literally can’t tell, some people just don’t even have a prominent way to hit rails. You guys ever gone up to Quebec?

Alex: Two years ago with Farv and met some homies there. Quebec is so dope.

Zach: Yeah two years ago when we were in our first year at UVM we went to Quebec with Joey Favara and linked with Cam willis and Mckin. It was like right after that red bull street contest they had at that classic down flat ledge.

Zach: And Liam was nice enough to show us around a bit.

Alex: Yeah and a beautiful place.

Zach: Yeah it’s like all on a hill and has dank old statues and buildings and shit. There’s tons of shit there and even though JF and the HG homies have hit a ton of the stuff I feel like there’s still some fresh stuff there.

Alex: Mad legendary spots, and also Phil and Henrik obviously have done a lot of shit there. I’d love to make a trip there again at some point.

Flat Stan: So sick that it’s on a hill,  definitely wanna make a trip out there next winter.

Alex: You should, is it close for you?

Flat Stan: I think pretty far like 15 hours or something.

Flat Stan: Further for you guys?

Flat Stan: Jeez your lucky, so prime. Makes sense why so many clips HG gets are from there now. Yo gotta do some stuff now, but was good hearing from you guys!

Zach: Word, it was good talking to you man!

Alex: Hyped to meet you dog!

Zootspace: Who the hell is Flat Stan? What is he trying to edit that’s not clicking? The story of Flat Stan coming soon on http://www.zoot.space…maybe.